My cynical moment of the month has arrived.

I'm not prone to use swear words. I'm also not prone to throwing eggs at anyone. NJ Transit is a hair away from eliciting both from me, if not something far more dramatic. For now it will be a very un-dramatic blog post.

I should really expand the hatred toward all forms of New Jersey Transportation. I don't know anything about boating around here so I guess I'll put water travel aside. Travel by air is annoying - Newark Airport flights have been delayed at least 80% of the time I've been flying in or out of the city. Travel by ground is simply horrendous. The trains to get to the airport are often late, not by much but it was definitely noticable when the weather was colder. If you miss your connection from Newark Penn Station to the Airtrain Rail Link Station, you pretty much have another half-hour to kill. If you had missed it in Westfield, well, you better have an hour's worth of shopping to do.

Tonight's complaint, along with just about every other night I take the 7:45 bus home to Cranford, was an unexplainable 35 minute delay despite a steady flow of cars and not a drop of precipitation anywhere. Since this particular bus is so very often late, I had a feeling I knew who was driving. As I stood in the chilly wind (avoiding the smoker who so politely stood smoking inside the glass shelter), I was contemplating making a bet with the other folks waiting at my stop, that the late bus would be driven by a black woman who is either on the phone or just being completely lazy. You see, I've been here before, so it's a bet I knew I'd win. After half an hour though, all the other folks at the bus stop had given up and left. When the 113 bus finally did arrive at 35 minutes late, it was her, sure enough, and as I took my seat, I couldn't help but notice that the bus was completely empty, suggesting all her other stops had given up on her too. I had to ask her a few times (since she ignored me at first) what the hold up was. With a single, slothful word, she blamed, "traffic." Clearly though, the traffic was not the problem. I asked her if she always had this shift, and apathetically she said she did, every day but Monday. So note to self, catch the 6:50 or don't bother trying to leave work until the 8:50 rolls around.

$65 a month for a two-zone bus pass seemed fitting for the coldest months, January, February, and March, but it's debatable whether it would be worth an April purchase. I'd really like to get a bike to help cut down the otherwise 45-minute walking commute each way - not to mention, the sidewalks are so uneven around here that one square of cement will be 2-3 inches higher than the last (which is why I still have a black and blue toe from a violent stub I procured while running last fall). And, finally, the roads themselves are a complete hassle if you don't know them, and traffic is horrible in certain areas (especially route 22, which is somewhere you drive if you have a deathwish). This area of New Jersey is so old, it's debatable whether city planners even existed (above a mole's intelligence, blind and willing to run into whatever existing tunnels may have already been laid out).

Perhaps I'm just a suburban, midwestern chick, but on the other hand, let me tell you from experience, I'd sooner navigate through Chicago than deal with any form of New Jersey transit. And now, venting time is over. Hopefully this has been a joy to read, for my more sarcastic family and friends. Good night!

Autumn and Winter in Westfield

Some photos for you to enjoy.
(Click image for album) 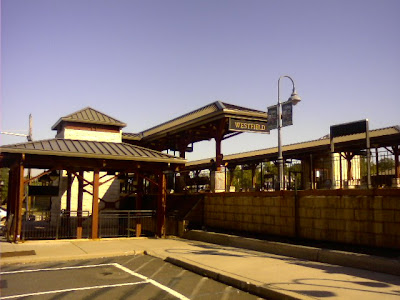 Album Information:
Autumn and Winter in Westfield
09/22/08 - 03/06/09
Various photos taken of my new home away from home in Westfield (and Cranford, etc), New Jersey, where I now work as a character animator for Speakeasy FX. My husband and I were married on September 6, 2008, and have had to live apart during these first six months, as he is employed in Chicago. However, we know that we are strong individually and as a married couple, and look forward to the time where we can work at jobs we love AND live together!
Posted by Laura "Sko" at 3/05/2009 09:30:00 PM No comments: