I Can Tell You How To Get To Sesame Street

Today I got a golden ticket. I got a chance to re-awaken my childhood fantasies by setting foot on the set of Sesame Street at the Kaufman Astoria Studio in Queens, NY. And I can tell you how to get there. 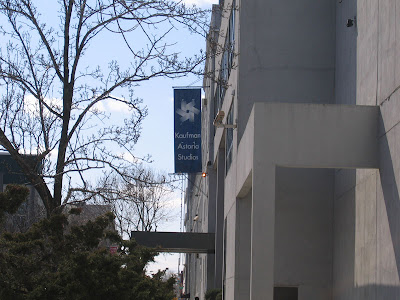 From Westfield, NJ, take the Raritan Valley Line to Newark Penn Station, then catch the NEC line into New York Penn Station. Then go to the 1, 2, 3, 9 line one stop uptown to Times Square. From there go up the stairs, turn right and go to the NR line to Queens. Get off at Broadway and walk to 36th street where you hang a right and walk two more blocks. There will be a huge gray slab of a building, inside of which are wonders your inner child will all but scream in excitement to see. 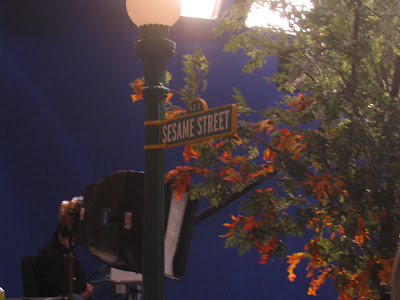 This is exactly what I did today, February 23, 2009. I worked for about an hour this morning before we (six of us, 5 animators and 1 td) made the trek into the city and met up there with our executive producer, art director, and assistant. Together there were only maybe 9 of us, about a third of the overall team who would visit Sesame Street over the next couple of days. We dined briefly at the terrific Benjamas Taste of Thai before continuing back in time to when we were children still learning our colors and alphabet.

It started out simply enough. We donned our visitor badges, rode a tiny, crowded elevator up up up into the lofty heights of Jim Hensen's imagination. We were temporarily stored in the breakroom where we were offered beverages and snacks, but most of us were too much in the way of jumping out of our own skins to be next to Gordon eating a peanut butter jelly sandwich, or Snuffy taking a quick trip to the restroom. We were told that we nearly missed Ricky Gervais who was there earlier shooting a segment, but we were passed briefly by mister Brendan Fraser who offered a quiet "hi, folks" as he gently tugged along one of his sons (I believe Griffin) who was there to accompany him for another segment of the show. A little surreal in such a down-to-earth, kid-friendly atmosphere. For a second I pictured it must be a similar feeling for parents with kids who go to school with children of celebrities.

Meanwhile, we got to see a lot of the sets crammed into Studio J. It started off with Big Bird's nest, which we were able to take photos of (with ourselves sitting in it), and all of Big Bird's stuff. We saw Hooper's Store and various other memorable spots, as well as a play area where Elmo and Abby's tricycles sat (those are for the animatronic puppets they use very occasionally, which we unfortunately did not see). We got to see the 123 building with the large cement steps, and there we all piled up for a photo. We were joined by mister Joey Mazzarino (who visited us at Speakeasy FX just weeks ago with his puppet Murray from "The Word On The Street"), holding another puppet, and also Eric Jacobson who was bringing Grover to life in front of our eyes.

All of this we were allowed to capture on camera, with few exceptions. We were not to photograph any of the rehearsal time for the upcoming shows, obviously, and perhaps less obvious, we were not allowed to photograph any unmanned puppets, so as not to destroy the magic of their lives. There were a few lying (or in one case, hanging) around with blindfolds on or blankets over them, as if they were sleeping for a time. There is no stone unturned in the art of Sesame Street puppetry.

Of course we were already giddy as can be to witness all that we had, but better still was a personal visit from miss fairy girl Abby Cadabby, puppeteered by the extremely talented Leslie Carrara-Rudolph, who is infinitely dynamic and overflowing with positive energy and enthusiasm. It is incredible that the entire time Leslie held Abby, she simply *was* Abby the entire time, and we all regarded Abby as just another living being voicing her fiesty fairy commentary of the world around her. It was absolutely fantastic. We talked a lot about things I can not go into detail about here, but it was amazing and completely revitalized our creative spirits.

One thing I simply love about Sesame Street is their committment to teaching love as much as anything else. Love thy neighbor. It must be somewhere in the mission statement, certainly. Everyone at Sesame Street seems to embody that ideal, especially the actors - and as we witnessed with Abby today, there is always enough love to go around. While she was speaking with us, she noticed some children passing by and stopped to chat with them. We got a lot of photos and video of her interacting with the children and simply feeding off of their unbridled creativity. One six year old child by the name of Baboo got into a joke match with Abby that went something like this:

Later, Leslie broke out of character just long enough to tell us a story about a young four year old girl who had already had nine heart surgeries. How they met, I'm not sure, but Leslie spoke of picking up the phone and loving to dial children like this to speak to them with Abby's voice bubbling, "How ya doin!?" It was extremely touching and reminded me of Kevin Clash's story about performing once with his childhood friend Cindy, who I believe died of cancer of some sort, only eight or so weeks later. These people have an unfathomable love for what they are doing, but they have an even more fervent desire to express that love, share it, and teach it to all children. It is incredibly inspiring and exactly what I love about this business. 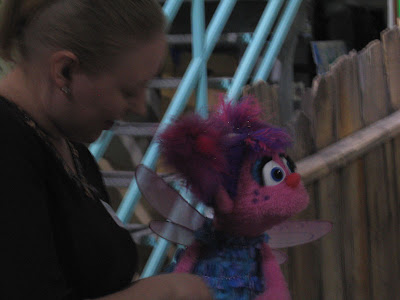 Unfortunately I did not meet Kevin Clash today. He may have been there - he may have even walked past us, but if so I did not know. I wish I had. Just in case, I had brought his book along with me, "My Life as a Furry Red Monster: What Being Elmo Has Taught Me About Life, Love and Laughing Out Loud," which I began reading a couple years ago - far before I even heard of Speakeasy FX, long before I realized Sesame Street was running full speed ahead into their 40th season on television. Sometimes there is an uncanny feeling that my life as it is, with all its hiccups and craziness, is somehow exactly what it should be, as if I'm on a path that is greater than I am able to comprehend at the moment. With the group of us there it would have been hard to convey as sincerely as I would want the thanks I have had for his inspiring tale and for bringing us our beloved Elmo and all the love that goes with him. Maybe some day I'll get to tell him that.

Meanwhile, it is awe-inspiring that I grew up with such a character and loved Sesame Street puppetry, as well as my own dolls, sketching, ceramics, traditional animation, computers, acting, and finally computer animation as I got older and thought about a career. It can be so easy to slip into thinking life is hard with today's economy and just having been married but now having to live separately, and all the things I have been going through in the past year - but taking a step outside of the problems, my life, now as a character animator, seems so simple, so clearly laid out, and ever so fortunate.
Posted by Laura "Sko" at 2/23/2009 10:32:00 PM 4 comments: