Adventure is Out There! 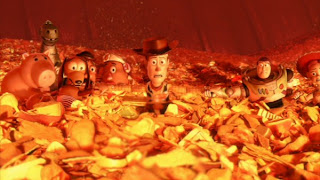 Man. I can't watch this part of Toy Story 3 (the Incinerator) without crying. So intense!!! :-p Just hits you in the heart the way they look at each other in the face of death. That sort of raw, instant empathy I feel for them is exactly why I love Pixar and their ability to tell stories. 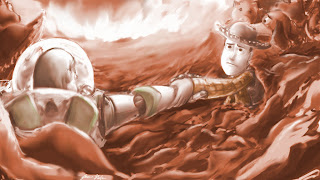 I'm not sure what's next for me in Austin, TX when I move there this summer, except to say that no matter what I'm doing, I hope I'm animating something great. I don't have anything lined up just yet in terms of work, but there are two really amazing looking indie productions I'll be working on with others, and the viz dev is already blowing me away on one of them. So whether I find myself employed or not... I intend to find myself on an adventure. 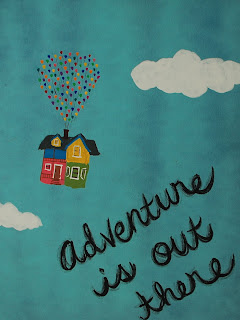 A new kind of greatness yet to be defined.

First, I love to drive. LOVE to drive. When we moved from Chicago to NJ, I drove us the ENTIRE WAY. Naveen offered to drive several times, but I took it on and loved it (until we nearly ran out of gas at 1am in NJ where the gas stations close at night.. but we still made it).

Secondly, I have learned to hate the trains. A part of me still remembers the wistful, distant chugga chuggas and woot woots with blissful, rose-colored nostalgia. However, the bigger part of me remembers being shoved around in the vestibule between cars when all the seats were full and "standing room only" on NJ Transit would equate to being married in some countries, as no part of yourself is any longer private in the mangled mess of limbs and briefcases and bags.

There is of course the memory too of being able to read, sleep, and converse with people while riding the train, but those occurred primarily during the wait for a train to arrive a half hour later than scheduled, or more, or while on a stopped train waiting to start up again.

A lot of time was wasted on NJ Transit in the past couple of years. My route cost me 1.5 hours or more each way, depending on one excuse or another about a train becoming disabled, blocked by another disabled train, police activity, or an unexplained cancellation, so anywhere from 3-5 hours per day had been spent on or waiting for trains. Even on the worst days when Route 1 is stop and go and the Garden State Parkway is more of a Garden State Parking Lot, a one way trip will at most cost me 1.5 hours; but on a normal day, one way is 45 minutes.

Then there is the cost. I plan to save my receipts through April to determine my cost of travel. With the trains, a monthly pass for me to get from Jersey Avenue to Westfield cost me $248. From J-Ave to New York Penn is $361 per month. This of course doesn't count the 10-15 minute drive it takes to get to J-Ave, and of course it overlooks the fact that J-Ave is closed on weekends - I have to go farther up the line to New Brunswick to catch a train in that case, or if I am going by myself instead of getting dropped off, I have to go south to Princeton Junction for a chance at a parking space, which you pay for and then pay more for your ticket as well.

It's true, gas is expensive right now. I filled up on the night of 3/31 right near home so that I could start this experiment with a full tank of gas. The gas was $3.31/gal and my total was $45.22. I will not be counting this toward my April total, but I figure if gas is an even $50 per week, that's $200 per month and definitely cheaper than the train. We don't have car payments on this old thing (on April 1, I had 146,862 miles on it!), so that helps, and our insurance is pretty reasonable at $64 per month (both drivers and a variety of services), but keep in mind if you were actually making a cost analysis of train vs. car, you still need a ride of some sort from our apartment to the train station, so that can't be overlooked.

Three months of 2011 are complete and no posts yet until now. You know why.

It's been a fairly crazy start to the year. After being unemployed for a large part of 2010, I got to enjoy a long-anticipated return to SpeakeasyFX for a stunning 5 or 6 hours before I became pretty badly sick and had to stay home for 2 days. Ha! But, illness aside, it's been a remarkable new season so far, with a 700-frame weekly quota and some fun new characters. I can't wait to show everyone.

Now for the real reason for this post, and no, it's not an April Fools prank (which I love)...

The bigger news of course is that Naveen just started as a tools/engine programmer yesterday at Twisted Pixel Games in Austin, TX. He got the offer back in January and since they didn't need him until April, we had to sit on it for a month while we figured some things out. We were finally able to make our public announcement on the week of March 1, so that he would give his two-week notice and have two weeks until starting at TPG.

First of all, Austin is great. The climate is particularly awesome right now, when the upper region is still dealing with snow and sleet and freezing temperatures. However, more impressive is the people. EVERYONE seems incredibly nice. And I think I'll be even more of a foodie there than I am here.

Secondly, toward the end of February we were able to schedule an apartment-hunting trip to check out different sides of town. After sifting through literally hundreds of apartments, we had only enough time and energy to check out a little over a dozen of them in person, and we were able to make a decision by the time we left, which gave us a little much-needed peace. Then toward the end of March, we scheduled the move in, but we decided to keep most of our stuff in NJ for now, shipping only his computer and two suitcases full of his clothes, a couple books, and dishware. We cleaned the apartment and had maintenance look at a few things, and got him an air mattress, computer chair, and other necessities. It is a 2 bedroom, 2.5 bathroom townhome, which we are tremendously excited about -- at least 300 square feet more than our current 1-bedroom apartment, and $60 less per month. It's in a decent area, and about 10 minutes from his work.

Now begins my hunt, and a lot of personal decision making. I have a tremendous employer with managers who know my situation and have been extremely helpful and understanding through the ordeal. I have been doing my ultimate best at keeping my emotions at bay and focusing at work, but I am once again dealing with separation from my loving husband and it isn't easy. I am looking forward to joining him as soon as possible, and I am still deciding how and when that will happen. My animation contract doesn't exactly have an end date but our current project will complete animation sometime in July, so that is when I expect to move. It seems as though there are a lot of game studios in Austin, so I may find myself there as opposed to film or tv animation, but I have some other projects in the works as well, so we will see. Time will tell.