Yesterday I hopped the 9am train to NY Penn and was there by a little after 10am. It was a soggy, windy, brutal, nasty day to be hanging around the city, but I had plans.

I walked around in Macy's for a little while to kill time, and then headed toward the Flatiron district to meet my friend Jess for lunch. It was great to see her again! I hadn't seen her since my wedding, and we had a decent amount of life to catch up on. We ate at a place called Organique where we each made our own sandwiches. I made up a french baguette with sliced grilled chicken, leafy greens, brie, and farmhouse chutney. I was going for a recipe similar to that of the sandwich I enjoyed last November at Bierkraft with my sister.

I'm excited because Naveen and I have made plans to meet up with Jess, Dorina, Jac, and a bunch of their friends for snow tubing in Connecticut this weekend. Hopefully the weather will be good.. it's been so rainy the last couple of days, and supposedly we're due for a big snowstorm which is conducive to tubing but not to driving north for 3 hours there and again coming back home. But it looks like it will be a lot of fun, and it will be great to see everyone and get some fresh air.

After meeting with Jess I walked around the Flatiron, and was so ridiculously cold that I walked into some pharmacy and picked up an $8 pair of fuzzy gloves to help keep myself warm. The wind was just biting, and my pretty blue umbrella was practically destroyed, flipping inside out several times and leading me around like a bucking bronco. No wonder so many New Yorkers don't bother with them if they can stand getting a little wet.

At any rate, I walked around a lot and eventually walked past this other place I had considered for lunch called Boqueria. I had really wanted to eat there but the online menu links were suspiciously broken when I had tried to view them, and all I had to go on were cached links on Google. We thought maybe the place wasn't as good as it seemed, so we ended up at Organique.. but seeing Boqueria in person, it looked very inviting and warm with glowing, rusty-burnt-orange colors. The only thing I wanted was an appetizer I had seen outside called Dátiles con Beicon, or Dates stuffed with almonds and Valdeón, wrapped in bacon. Amazing. I loved the sharpness of the cheese mixed with the sweetness of the date and salty crispy bacon on the outside. Just superb. I was so excited about those flavors alone that I had ignored the mention of the wide, beautifully-blanched almond on the inside, and almost spat it out thinking it was a date pit!

I could eat tapas like that every day.. fantastic combination, and the chef (Seamus Mullen) was really funny. He came out playing with an iPhone or some kind of device joking around with coworkers about a neti pot photograph (only it was photographed near a "teti" pot gag gift... which looked like a breast with a spout!) which I was nosy enough to ask to look at and have a laugh with them. We and the bartender and a few other employees (not very busy in the middle of the afternoon) were joking around about the Olympics which was playing on the screen at the bar. It was a fun experience there and I would definitely recommend it and go back myself.

Man am I craving that right now.. MMM!

Okay so after that I headed to the lower east side to meet with Robert and Sally to talk about helping them with Dogsharks while work is still slow for me. Mostly it was a chance for me to visit his studio and see all the panels all over the walls, and watercolors. It's very fun and hopefully getting off the ground very soon.

Soon it was time for the Kids Media Salon meeting, so we headed over to the home of Carla Seal-Wanner, an amazing woman who hosted the event last night. Joining us again were Robert and Diane who I had met at the last salon meeting I attended in November. Also joining us were Charlie Schroder who I know loosely from seeing her at SpeakeasyFX, Julie Tortolani via Skype, and a woman named Kathleen (Kathy) Wilson who just self-published her first book, Rumer & Qix, a story about a girl in a futuristic, utopian, fabricated world who rightly suspects there is a bigger story out there and that something is amiss. Kathy was generous enough to share a copy with me and I'm excited to read it.

Later in the evening I got to speak to Kathy one-on-one, and I asked her what she did before working on her book. Years before she had gotten her bachelor's in Fine Arts, and had also worked at Paramount and Viacom. But perhaps the most interesting thing for me was early on in her career she worked with disabled children, holding art classes and exposing them to technology as well. I was completely fascinated and told her about wanting to cross my art and technology interests with my being drawn toward people with autism. I hope we get to talk more about her experiences.

Overall, topics last night mostly covered Kathy self-publishing her book as well as other projects we are all working on, including Robert's latest Dogsharks news and some interesting stories about being a sheep farmer, and Charlie and Carla's impression of Kidscreen this year.

I was fairly quiet this time, a little wet and wind-blown perhaps. But very good company and conversation, and a really fun time with cheese fondue, breads, crackers, fruits, nuts, and wine. Carla's home was very classy and (like Louise's) surprisingly spacious for lower Manhattan. We all had a wonderful time. Fantastic evening and a memorable day.
Posted by Laura "Sko" at 2/24/2010 08:30:00 AM 1 comment:

This is pretty darn cool, and very humbling. 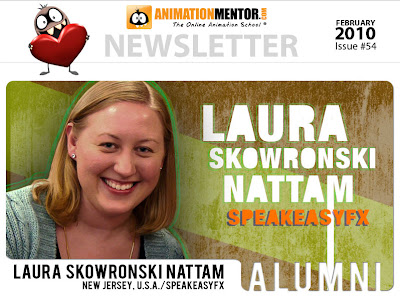 Thank you so much, to AM, Purdue, all of the SpeakeasyFX crew, my husband, and of course all of my family and friends, for giving me something wonderful to write about. I owe this most fortunate experience to all of your love and encouragement.

A few folks have asked if Sesame Street's "Abby's Flying Fairy School" has a homepage, and it does... Here!
http://www.sesamestreet.org/onair/theshow/abby

It talks about the show and also acts as a holding area for the interactive "play along" episodes that SpeakeasyFX helped to create. Enjoy!
Posted by Laura "Sko" at 2/10/2010 11:15:00 AM No comments:

In my hour of experience with the program (so far), Google Buzz seems like something to turn to once Facebook takes that final plunge of the deep end... but for now it's annoying that updates get sent directly to my inbox "so I don't miss anything." Heaven forbid I miss a friend telling me they're heading for the can with a smelly copy of War and Peace.

I already discontinued my use of Twitter, for similar feelings of annoyance that were plaguing me.

Fostering Narcissism, one social networking site at a time.

Too Lazy For Google

So, some of you may have noticed in the last year that I have developed another blog called Too Lazy For Google. When a really random question comes to mind, if you have the latest smart phone or gadget out there, you can look it up instantly and be everyone's go-to guy, like a co-worker of mine who is always the one to have to look up the latest dumbest thing that I and other co-workers want to know about.

I am not one of these people that clamors for the latest and greatest tech to satisfy all my crazy questions, because I know that either my inquiry will be unimportant and forgotten by the time I reach home, or I will simply put it on the back burner until I'm near a search engine that can help me. However, in recent months with a very lengthy commute, even the questions I'd like to remember have ended up lost somewhere in the gray matter. So rather than simply scratching out these impermanent thoughts on paper or a hand or something I really would rather not have written on, I've developed the blog to which I can send a text message that will free my mind for more important things, like determining whether I should get my Starbucks at Newark Penn or in Westfield.

The idea behind the blog is that no matter how interesting I may find my question at the time, I'm usually too lazy to bother looking it up unless it is truly important to my existence, so I post the more trivial questions there so that my fantastic friends and family might find it amusing and may even post a comment response, usually detailing what a Google search may have actually contributed to my knowledge base in that subject, had I not been too lazy to search for it.

I have one more humorous thing to share on the subject, and that is this recent post I found on Bauer-Power which features a hilarious website, Let Me Google That For You, that will generate a sarcastic visual tutorial for someone who is simply too lazy to look something up and would rather bother the closest IT professional (or my co-worker who gets all the random questions all the time). Say the person asked what "blogging" was, because they just weren't sure. Guy With All The Answers can simply type "blogging" into the LMGTFY website, which generates a page resembling Google, which Answer Guy can now send to Annoying Co-worker. This automatically-generated page for the word "blogging" creates a step-by-step tutorial which animates in the letters "b-l-o-g-g-i-n-g" followed by an animated cursor navigating to the "Google Search" button and a text field with the remarks, "Was that so hard?" and redirects the viewer to actual Google search results. I find it fantastic. :)

Brad shared this with us this morning, and it is completely heartwarming and adorable. Sing it, Nili!