I Made A Mother Cry Today

Not exactly a title to be proud of, but I'll explain.

Tonight, I left the studio after a productive day working on my first shot of the last episode of our show. It's sad to think that in just under a month it will be over, but everyone is striving hard to secure future work for the studio.

As I walked toward my bus stop, I passed crowds of people that one would be used to seeing in New York but not usually in Westfield, NJ. As it turns out, there was some kind of marathon today and the endpoint was right at the intersection where I catch my bus. So traffic was a madhouse and apparently I crossed at the wrong time because an officer yelled for me to stop (it hadn't been apparent to me that he was directing traffic, since he was in plain clothes and in the street like everyone else). Most surprisingly, my bus was on time despite the craziness, and I started up a conversation with a woman about all the marathon runners and food vendors packing the corner of North and Elm. We started talking about Westfield and traffic officers and the horrendous parking enforcement, and eventually about work. Of course when she asked me what I did, I told her I was an animator working for Sesame Street in the building with the clock on it. She lit up right away.

As it happens, her son is autistic, but responds very well to programs like Sesame Street, and she was quick to mention that he even responds better to the animation sequences than to the live action sequences.

If you know me very well, you may know that for almost 10 years, I've had a slowly budding interest in autism, so my interest in her story was piqued. In a very short bus ride, I learned that the boy was 12 years old, attending a special school called New Beginnings about 45 minutes north of here in Fairfield, and currently living with his father and stepmother. I was surprised to hear that he was only recently medically diagnosed with autism (in the past year), whereas the schools recognized it before he turned 3. I wondered how it was possible for the medical diagnosis to take so long. This is where things started taking an emotional turn for the woman.

She started describing that for the last few years he was living here with his father and step-mother, but for his first 7 years the boy lived with her in Minnesota (she actually may have said Missouri, but I can't remember now). The boy lived with her until she was completely burnt out, and needed a break. She started crying at this point, describing how until that time she thought she could fix him, and was in denial of the school's diagnosis, spending her time blaming herself. I had to hand her some tissues - I couldn't believe how much she was pouring out to a stranger on a bus. I did apologize in case I was asking too many questions and in a few words explained my interest in autism (from personal and educational standpoints), and she was eager to say it was no problem and not offensive at all. I felt badly when I had to exit the bus for my stop, and told her not to blame herself and to take care. It sounded like she might take that bus regularly so I may see her again. I hope so.

There's a lot I could tell you about my life right now and how things are going since our move - we are still not living together since I am up in Cranford through the end of August, and Naveen is in our new place in South Brunswick - and there will be much to tell once we are more settled. But for now, I felt that sharing this story was important. In one of our many recent driving trips throughout this state, Naveen and I passed a place called Eden (or Edens?), a center for autistic children. At that time, I related to Naveen that if animation work lapses for me in the next few months, I would highly enjoy taking some time to get involved there or at another center, voluntarily or part-time.

I hope not to offend anyone who is autistic or knows someone who is, but for a long time I have felt some sort of calling toward understanding autism - whether that means fighting it or simply embracing it, I'm not sure, but it is a subtle, strong internal vibe. Whether I'm a working animator or not, I hope to indulge in my interest soon and perhaps find a way to channel that into something helpful. 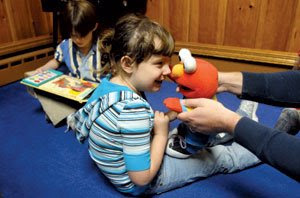