Wow, Animation Mentor is over. I'm flying home tomorrow afternoon, and in the evening I'll have my last AM Q&A Session ever. How sad.. and yet, how promising. I really love this program and would recommend it to anyone going for animation. Feel free to ask me about it at any time - I'd be happy to share my experience.

Here's how I finished the class (below). Note: I wouldn't call this final yet because I still have a lot of work to do on facials and hands and hips, and then lighting and rendering of course, before putting it on my reel. I was nervous about this at first, but actually most students don't completely finish their shorts in 3 months - they just get the film as close to final as possible. So, here's what I turned in at the completion of the course.

Comments and criticism still very much appreciated. Thanks again for taking an interest. :) Safe travels and happy holidays, everyone!
Posted by Laura "Sko" at 12/18/2007 12:14:00 PM 1 comment: 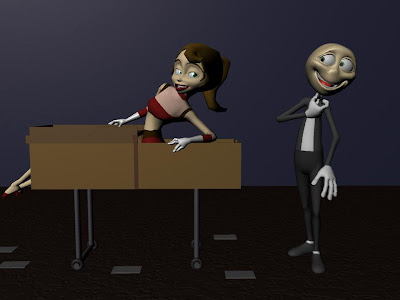 Tonight is the last official night of production on Misfit Magician. The deadline is at 3pm tomorrow, and while I'm feeling pretty confident about finishing, I've experienced 2 crashes in the past half hour and decided to take a break. I might pull an all-nighter for old time's sake, if I can manage the energy. It isn't completely necessary, but it might be fun and more relaxing that way.

I'm pretty psyched about finaling these shots. Despite the deadline tomorrow, I'll most likely continue to work on this piece through the next couple of weeks to get more facials and overlapping action in there. That stuff kinda got rushed this past week, and stuff like shoulders and hips are also lacking in interest. Camerawork too needs some help, especially at the end.

Tomorrow I'll post whatever I have, and I'd love to hear your feedback.

Until now I've been linking you to videos off of my portfolio site, but to conserve space there I think I'm going to start using YouTube for my videos.

Here's a look at the refining I've done on Misfit (see below). Most of the splining is done now except toward the end, where I'm still figuring out some blocking and camera issues. Overall, I still have a ton of work to do with eye direction and facials, shoulders, hips, and fingers, to name only a few. So at the moment I'm only looking for any comments on body mechanics, overall style and timing, and things like that.

Thanks for your interest! Hope things are going well for everyone.

In the true Laura Skowronski style, another small story has reached epic proportions. Over a month ago, now, we had discovered a lizard in our apartment that scampered off into the kitchen and took shelter underneath our dishwasher. For weeks I was obsessing with setting up boxes with spinach leaves and bottlecaps of water, trying anything to coax it out safely. I saw it usually once or twice per day when things were quiet (either in the morning or after Naveen had left for class). I almost managed to catch it once (see past posts 1 and 2), but failed and felt horrible about it, especially since I wasn't sure if I had hurt its tail. I stopped seeing it for weeks, and by Thanksgiving I had (almost jokingly) spoken a little lizard eulogy while putting dishes away. Surely it was dead by now, or managed to find a crack in the foundation, or something.

This morning (December 3) I woke up and was walking toward my desk to check mail before eating breakfast (because that's the kind of nerd that I am). As I wheeled out my desk chair - I saw a quick little flash and immediately knew it was my lizard. Naveen was just waking up too and was coming out of his bedroom when I told him to go back and give me 5 minutes - so he did. I barracaded the hall with a floor-length mirror, blocked off the kitchen with some boxes, and set up a clear path to the open porch door. Quite the obstacle course - and not the easiest thing to manage when you have a screwed up knee. Still, I was able to see the tiny lizard in the back-right corner under my desk. I had the poor thing cornered. I piled up a stack of printer paper in front of it, and reached behind the stack to grab the lizard - but she quickly scurried in a tiny little space left between the paper packages and my desk. So instead I laid a cardboard box on its side at the back wall, and I slowly pulled the paper stack away from the desk. The lizard was riding slowly on one of the packages as I was moving it. It looked pretty confused that I could change the world's geography with a slight of hand.

Now it only had two ways to go - either toward me and my scary self, or toward the box at the back wall. So it hopped back into safety, not realizing that it was standing on the inside of a box. I laid down on the floor and quickly folded up the box flaps to trap it. I could hear it scurrying around inside - but meanwhile I was ecstatic - I got it! I finally got it!

I took it outside onto the porch. Even then, it didn't leave the box just yet - it looked stunned that it was back outside after almost two months. It gave me a minute to take this quick snapshot (above) - which also shows how small this thing was - it's in a Hefty Cinch Sak box, and as I labeled, the side is about 4 inches, which is about the length of the lizard from nose to tip of the tail. 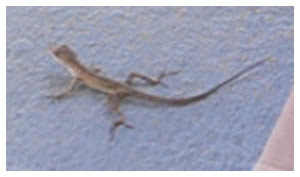 Let me just say, I know what you're thinking. And yes, I'm crazy. But I got a huge thrill out of saving this one tiny lizard, and I'll definitely remember that.