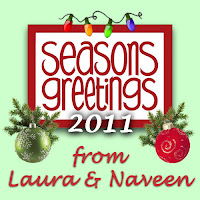 This year was yet another year of dramatic change for us. We spent the early weeks of 2011 working on the east coast: Laura had another contract with SpeakeasyFX to help animate a second season of "Abby's Flying Fairy School" for Sesame Street, and Naveen was continuing as a game programmer at AMI Entertainment. Every day Naveen would drive 45 minutes to an hour down to his job in Pennsylvania, and Laura would commute by train an hour and a half up to north central New Jersey to her job. But soon our lives would change.

We knew Laura’s contract would end in July, so the race began. Where would we go next? It wasn’t long before Naveen scored a really nice position at Twisted Pixel Games down in Austin, Texas. That’s right, Texas! So our journey began... again. As you know, when we got married on September 6, 2008, we thought we were going to be living in Chicago for a while, but it was only a week later that Laura got her first contract for the Sesame Street project and had to move, separating us for our first year of marriage. We overcame that and Naveen eventually moved out to be with her. However this time was Naveen’s turn to take the leap, which he did in mid-March. If anyone thought it was an April Fools joke when we told you Naveen was working in Texas on April 1st, we were telling the truth!

We visited Texas a couple of times to secure a place to live. We ended up at Iron Rock Ranch on Slaughter Lane, believe it or not! Sounded like Texas to us. Even before starting the job, Naveen was welcomed out to a co-worker’s bachelor party the night before he started work. His new company was a lot of fun, with a great atmosphere, challenging work, and great people. For Laura, it was an end of an era - she finished her work at SpeakeasyFX by early summer and had to quickly pack up the apartment all by herself! In true “Laura” fashion, she whirled through the apartment like a tornado to get most everything done in the final 72 hours. She flew our kitty Sully down to Texas over July 4th weekend, and made the final voyage with a loaded van at the end of July, first stopping for a few days with family in Indiana, then driving with her mom to Memphis and finally Austin. It was a great road trip and Mom seemed to really enjoy it too!

We spent the summer acclimating to our new Texan environment - tubing down the Comal River with friends, enjoying some great ribs at Salt Lick, gazing out over Lake Travis, hopping around on South Congress to the various food trailers, and more - all with the great folks we’ve met at Twisted Pixel. They even have a “wives” club, no joke, where the women together for brunches and bake-offs and such, which Laura loves. She has also stayed very busy since the summer, getting freelance projects here and there, and supervising layout and animation on an independent animated short film, which will likely come out next summer. Naveen has been working hard since the release of his first title, “Gunstringer,” for Xbox Kinect. His company was just acquired by Microsoft, which is a great deal for everyone - TPG gets to continue generating creative projects, Microsoft gets to exclusively publish their great games. It’s a win-win!

In the final months of the year, we are busier than ever. But we wanted to take a moment and wish you a very happy holiday, and a happy, healthy 2012!