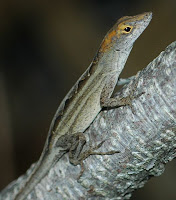 After seven months of living in Orlando, always watching my steps and keeping doors and windows shut, a lizard has snuck into our apartment.

It looks as though it is a small brown anole, presumably female, and seemingly young. I feel horrible about it - I don't have a clue about what to do. It showed up last Wednesday while I was working at my computer.

Naveen had the day off and was playing Halo 3, and all of a sudden he shouted my name - I turned around, saw that he was looking at the floor, and when I looked down, this tiny little thing was looking back up at us and darted under our dishwasher in a flash. She (or he) has been there ever since. I've had small boxes lying around just in case I could catch it and get it outside, but I haven't had the chance. For the first day or so, I left a bottlecap full of water and a few spinach leaves on the floor near the dishwasher, hoping the little "guy" would come out. I didn't see it the rest of that day, but I saw it the following morning, standing motionless behind the stray leaves, as if frozen when I came into the room, and then scooted right back under its safe haven. It's been almost a week since I've seen it, and assumed it might have died or found a crack in the foundation to escape through - I even removed the water and spinach leaves.

But most unfortunately, I saw it again tonight as a dishwasher cycle was finishing. I heard the "click" of the dry cycle winding to a stop, and turned around to unload the dishes, and there she was, looking confusedly at the cabinets and walls around it. By now it must be so very hungry - unless it has managed to find any small bugs that might have snuck past us. I feel terrible - from the beginning I wanted to capture it and take it back outdoors, but it is so fast and tiny that I doubt that will happen. Either it will starve underneath my dishwasher, or we'll have to throw something at it or set traps for it, which doesn't appeal to me. I like lizards a lot - especially because they keep our nasty bug population down - so it's really sad knowing one is trapped inside our apartment and too scared to venture out more than a few inches into the kitchen.

If you haven't seen the adventures of Pat and Stanley (French animation), you should probably check it out. They're quite cute. Go click on "Clique ici!" (click here) and check out some of the videos!

With much thanks to an awesome guy called Ryan Ellis (see website), I was able to solve my question about the rabid rabbit fur issue (which was, can it be done). Simply put, yes, and it took just one phrase in my command line: 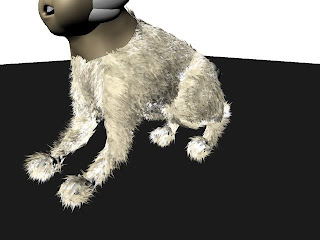 Yup. That was it. Automatic Mapping. I knew deep down it was a UV issue; I'm just terrible with UVs, which is another way of saying I'm too lazy to really study it at the moment, what with all the animating I'm doing (when I'm not sleeping for 4-6 hours). Oh yeah, and checking Facebook, cooking, or watching lizards on my porch.

Update: This issue has been resolved - see Fumble Fixed. Thanks!

I have a technical question for someone to answer. Have you ever worked with Maya Fur, or know someone who does? I can very well apply and adjust fur settings to a generic polygonal model, but I can't seem to apply it correctly to this character I'm trying to create. 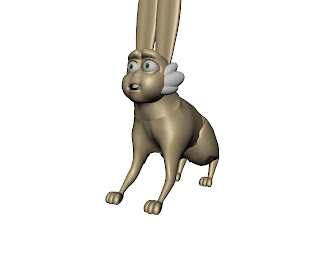 You don't have to tell me - (I know!) - it's a weird model: it's actually a rigged dog model, with a human facial rig grafted onto that, with a rabbit ear rig grafted onto that. It is a working rigged model with separate geometry for body, head, and ears, and I've begun animating on it via reference in another file, so I can keep tweaking this model and rig as needed (whiskers come next). 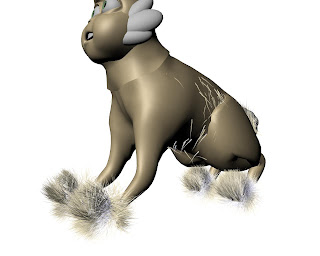 My idea was to apply some short fuzzies to this creepy little guy, but for some reason, when I apply fur to the body model, it covers the feet and a few spots here and there, and otherwise leaves bare skin. 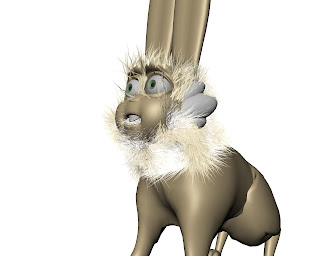 I can apply the same fur to the face and ears, and the pattern is even, so I'm guessing it's a problem with the body UVs... but I know very little about that (or how to fix it), and I'm not too sure if that's even the issue. 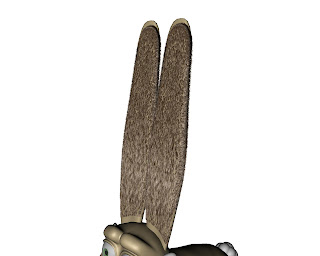 Just a note to reiterate: it has been possible to apply fur to the face and ears. 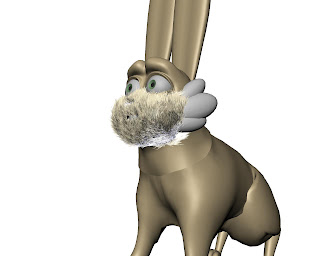 So has anyone out there ever done fur? Any thoughts on what the problem might be?

Some Buzz about 'Bee Movie'

I'm a fan of Oprah, and yesterday afternoon she had Jerry Seinfeld on the show to talk about his new DreamWorks animated film, Bee Movie. Here are a couple things he had to say which I thought were kind of funny:

"There's no history in comedy. Just do the jokes."

-Jerry Seinfeld on 'Oprah', discussing her desire to develop and perform the character of Judge Bumbleden in the upcoming DreamWorks animated film, Bee Movie.

"It's like you bought a present for somebody that was way too expensive, you can't return it, and now they're going to open it. It's an awful moment. Because there's a chance they're going to go, 'Oh' (disdainfully) and 'lovely' (wincing). You know? And you go, 'Well, I'm out of money, I spent everything I had on this, you know.' But, it's nice to give presents."

Definitely check this out, if you haven't already:

I was hoping to get in, but I really didn't have a finished piece to submit. Maybe I'll make the Winter 2008 reel. Gotta keep trying!

Meanwhile, I had to report to AM that this reel includes a tiny clip of a scientist running from a mummy (in the short film highlights section), which I'm pretty sure belongs to my friend David Clark - but his name isn't on it. I don't know if they meant to trim his clip out completely, or if his name just got omitted by accident - so hopefully they'll take care of it by the time more people watch it today.
Posted by Laura "Sko" at 10/09/2007 09:12:00 AM No comments:

Just reporting on a news item I saw today at AM:

The Student Choice Awards are a way for students to honor excellence in their class here at Animation Mentor. They represent a unique honor in that they are completely student driven. Students make the nominations and students select the winners.

Awards for the following 8 categories will be presented at the graduation ceremony in San Francisco, CA on January 12, 2008.

If you would like to be considered for any of the following awards, please upload your work over the next week. A nomination survey will be sent to your email address next Thursday, October 11th.

How do I upload my work?
Upload your work in 2 places! First, upload your work under "PUBLIC REVIEW". Second, post your submission in the Student Choice Awards Forum Posting found in Short Film Discussion. This will make viewing work much easier for your fellow students to view your work.

Can I submit work for multiple categories?
Yes! Simply upload as one movie but with a title image at the beginning of each upload.

What are the Categories?
You will find a detailed description of each award in the forum posting mentioned above.
1) Most Improved Student
2) Most Entertaining Video Reference
3) Best Dialogue Acting Award
4) Best Silent Acting Award
5) Most Encouraging/Supportive Student
6) The Walk Cycle with the most Personality Award
7) The Forum Ninja Award
8) The Biggest Personality in a Live Q & A

Maintaining Your Knowledge Base

Time and time again we hear from our dear AM crew exactly how important it is to expand and maintain your own personal knowledge base on animation (and in life, haha!), and of course, it is imperative. So, I don't know if anybody else does this, but throughout all of my work on my class 6 project so far, I've been building a knowledge base for myself: just a simple text file that I try to keep organized by topic, and update weekly with problems I ran into or solutions I found. It definitely helps me retain things I've learned. You're welcome to check it out here:

It isn't anything to brag about. It's just really helpful so I'd encourage everyone to try it.

So, here's just a tad of news for anyone who's curious.

My new mentor this term is a really cool guy, Greg Whittaker, who I'll meet via webcam tomorrow night (and every Wednesday night for 12 weeks) from 11:30pm - 12:30am. Here's some profile info on Greg:

About Me
I have worked in the animation industry for close to fifteen years. After graduating from Sheridan College, I worked for a brief period in studios in Toronto and Vancouver before accepting a position at Chuck Jones Film Productions. I spent 3 wonderful years there working on theatrical shorts starring classic Looney Tunes characters. I made the move over to Dreamworks in 1997 and have spent the last 10 years there working on both traditional and CG films. Most recently I completed work on Flushed Away and am currently working on Jerry Seinfeld's Bee Movie.

My Interests
Spending time with my family, sports, movies and music.

So that's pretty awesome. Also, I've updated my schedule so that it's not so daunting (the one I made in July or so was just ridiculous)! Here's the new version: 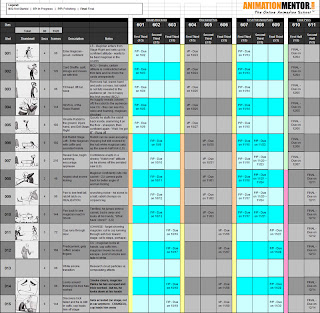 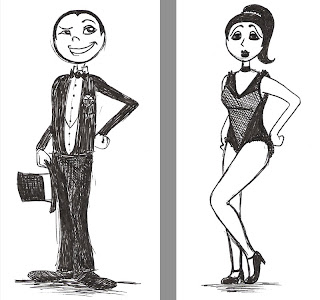 Now it's definitely time to jump into Maya and get going on my first shot! I want to try to block it all out today, since it's only going to be a max of 4 seconds.