[Note: I started drafting this on August 28, when animation on our show finally came to a close - but I have since been busying myself as a generalist/layout AD for the interactive projects that will air online alongside the broadcast episodes. However, that production is wrapping up soon as well, and we are hopeful to begin work on something new very soon. Huge good luck and bon voyage to Scott as he ventures to France for the big MIPCOM/MIPTV/MIPJR conferences, armed with a gorgeous portfolio and work that we're all very proud of. Best wishes! And now for that post I was writing almost a month ago...]

So, today marks the last official day of animation at Speakeasy FX on the broadcast project we've been working on for Sesame Street. It has been an amazing year, and I think it's allowable now to tell you that the name of the thirteen segments we animated is called Abby's Flying Fairy School, which is already searchable on Google, since the start of this month when PBS made their press release.

Here is also an article which includes a rendered still of the show. 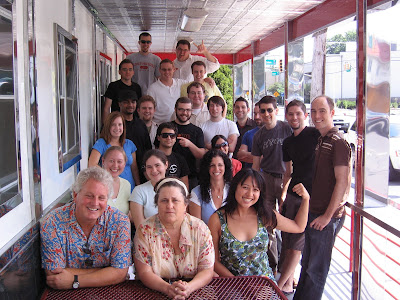 It boggles the mind a little to think about how this last year went for me personally. Towards fall of 2008, I was completely absorbed in wedding planning, and very focused on the upcoming state of simply being married. I did work on some small animation projects myself, but few that I felt were going anywhere because of moving, wedding planning, etc. Toward the wedding, I was more and more focused on being a bride, and being a very happy, thankful one at that. However, just ask my husband and he will tell you that throughout last year I definitely had my moments (or -insert long periods of time-) of feeling down about myself as a person because I had spent all kinds of time and money and effort trying to become a professional animator, and instead I saw myself as a small-time graphic designer who didn't sell herself well and might very well not (dare I say never) find herself animating professionally anytime in the near future.

And then we got married, and a week later, I heard from our dear Sally Anne, EP and awesome lady extraordinaire, who heard about me through a contact from Animation Mentor by the name of Bridget Haley, former career services manager there. And it just so happened that I had met Bridget at GDC in SF earlier that year and she recommended me to Sally Anne, and the rest was history. The moment I got Sally's email was the moment my whole mentality changed. Instantaneously I knew that there was no other way than to accept the position I was being offered - not because it had been the only one, but because it had been the only relevant one to me, and an extremely special one as well. I knew in the moment I received the email that everything was about to change, and I had no fear. This was what I had been waiting for, trying for - - - why it had to happen a week after we got married, I'm not sure, but it truly was a blessing.

It certainly was interesting, showing up on September 22, 2008, to a small office above a tuxedo shop in Westfield, NJ. The place had been partitioned into what we called 'pods' which organized animators, generalists, and editorial/direction staff, and to give an idea of how rushed the process was, the computers and desks were still being assembled for much of that first day on the job. Speakeasy FX had been a small commercial outfit for the last couple of years, and suddenly it had taken a fast forward plunge into children's television, exploding in size from a couple of specialized folks to suddenly around 16 - about a 8 animators, 2 generalists, a production assistant, an editor, an art director, an animation director, an exectutive producer, and the owner - plus a small handful of accounting and other staff that worked out of NYC, so we animators didn't get to know them too well. And as time ticked on, 5 more animators came onto the scene, and about 5 more generalists, new editors, new assistants. It was awe-inspiring, being a part of such a special production team while watching this growth unfold.

Simultaneously though, it didn't take long for the heartache to start of being separate from my husband in our first year of message. The time was ticking away, month by month, and by spring our personal misery was beginning to become very noticeable at work, which we had fought hard to avoid. We searched and searched for an opportunity to live together and work on the east coast to accommodate my job, since his job was lacking the challenges he anticipated. Even looking for work elsewhere was difficult because it not only meant leaving a company which had swept him off his feet at a convention, offering him a tremendous salary and benefits package for an entry level programmer, but it also meant uprooting ourselves from living near our families in the midwest and from the beautiful apartment home we were starting in Chicago.

Still, we were determined to find an opportunity to live together again by the time our first anniversary would come to pass, and thankfully we were able to fulfill that goal when finally a company we were hoping for came out of a hiring freeze, and a friend at the company helped to get my husband's name heard until an offer came for us. Despite an enormous pay cut and decrease in benefits, we took it to meet our goal to live together, and thankfully the job has proved to be far more involving and gratifying for my husband. We are very hopeful for my animation career to continue out here in the coming months, and I am certainly grateful to have been able to remain onsite at Speakeasy FX to help direct the online interactive media projects. What is next, few are sure, but once again all the best to Scott in his endeavors at MIP these next two weeks, and hopefully we'll be celebrating soon with more work for this very special crew. Bon Voyage, à tout à l'heure!!!
Posted by Laura "Sko" at 8/28/2009 07:04:00 PM 1 comment:

No Limbs, But No Limits

Truly amazing video, and a very inspiring gentleman who has remarkable strength and wisdom for someone my age.

Another Stepping Stone for my Interest in Autism

Tonight after work I went downstairs to do some laundry, and I met a neighbor, Barbara, a 59-year old woman who works at Seton Hall University and takes classes there simultaneously. We were having a friendly commiserating moment about being halfway through the workweek, but I added how I really can't complain because I love what I do, and I'm lucky enough to still be doing it. I was supposed to have been laid off about two weeks ago, but was needed for some help on our interactive projects. Again, I was supposed to be laid off this coming Friday, and again, it looks as though it will be pushed another week so that I can help to complete the project (hopefully). It's going to be a very hectic, fast-paced week, but I'm very thankful to still have work and to be valued so much. It's a very special feeling to have at work, and I've already mentioned several times on this blog what a special company this is to work for.

Getting back to the whole fate thing.. I believe I mentioned in my last post that I wanted to be getting involved somehow with Autism, perhaps helping at a clinic or something. Well, while discussing with Barbara what she was learning this semester, she also happened to mention her involvement helping those with Autism through ARC for Union County, a non-profit membership-based organization dedicated to enriching the lives of individuals of all ages with developmental disabilities and to assisting their families in promoting the quality of their care and support. As it turns out, ARC is based in all New Jersey counties, so there is one near us in Middlesex (where our new apartment is). So, of course, I am completely psyched to check that out more.

That's unfortunately where I have to leave that tonight, because I have to finish doing laundry, taking trash and recycling out, and doing the dishes before going to bed early (ha!). Tomorrow I will be attending a meeting with Nitrous and possibly some Sesame Workshop folks to discuss our interactive projects, so the morning will be slightly more rushed for me than usual. I'll have to catch an 8:15 train into Newark Penn and an 8:55 NEC line to NY Penn for a 9:15 arrival there. Wish me luck. ;)