It's bad enough to get unwanted calls from time to time. It's almost more annoying to continue getting unwanted calls regularly per month from the same venue. 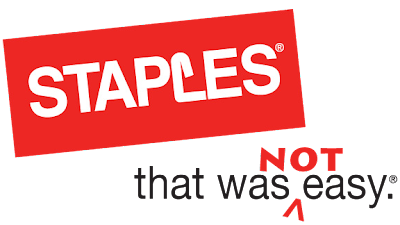 I've gotten many calls in the last year claiming to be from Staples Rewards.. many times I ignored the call, let it go to voicemail, etc. But the last couple of months I started asking to be removed from the system, with no luck.

On September 16, I got a call from a pleasant sounding woman named Shiny (yes.. Shiny) who claimed to be my Staples Rewards account manager, which seemed weird to me because to be honest I rarely shop at Staples - I made a large purchase a few years ago when I was initially setting up my home office (desk, chair, etc) but I don't have many office supply needs. I think I signed up for rewards at the time, but to my knowledge I've never received any Rewards information or benefits, and had since forgotten about the program. She seemed perplexed because there was activity on my Staples Rewards account, $12 here, $30 there, etc. That certainly wasn't me - I don't know the last time I shopped at Staples. I gave her updated information (no credit card, just email and home addresses) and she said the Rewards checks would come to me now, but I have just found this very confusing and thought I should report it. The contact info she gave me was Shiny Varghese, 866-319-8181 extension 7654, but she called me from 306-584-6705.

I reported exactly that to a customer service contact form online, but never got any response. Then today, I got another call from Shiny. Of course now she had all the updated information I had given her the last time, but I had still not received any rewards checks or even any account information - no mail at all from Staples. She was again perplexed to hear this, and I just told her I didn't mean to be unfriendly but I wish to stop the unwanted calls as I am not currently a Staples customer, my former account information is not accurate (and has not been corrected), and someone else is using my rewards checks (although they are buying with the card so they should be getting the awards.. I just don't want the calls anymore)...

So I reported again to the online form that I had received another call from the same person and now I absolutely would like to be removed from their system. I even went to the Staples customer service live chat and spoke briefly with a person who didn't know what to do, and then gave me a number, (800)793-3320, which I could call to get my information removed. I called, and reached a woman who said my telephone number wasn't in their system. Frustrated, I asked why I am getting calls from reps, and she suggested it might be this other department, so she gave me another number, (877) 235-9088. When I called that number, I spoke with an operator, and got redirected back to the original number. At this point I was so fed up that I just disconnected. I imagine the next time Shiny calls me, I will demand to speak to a supervisor. All of the roundabout calls ignite my dramatic side and makes me just want to organize a boycott of Staples (if it is actually them, and if not I just wonder if these are just some amazingly connected scam artists up in Saskatchewan -- which is apparently where Shiny calls from).

There are other people as frustrated as I am out there. I searched Shiny's phone number on Google and made a complaint on this 800notes.com website along with maybe a hundred other people who also have received calls claiming to be from Staples.

This is hardly the first digital representation of myself that I have made. Nor is it anywhere near the best. I just thought I should share the 5 minute pose exercise I did yesterday morning over coffee and waking up my animation brain for the day. It's not a great pose, but I want to do more of these "quick sketches" since they prove useful to do with a sketchbook and pencil or vine charcoal.

Thanks to Animation Mentor for the customizable Bishop 2.0 rig. It's very versatile even in its beta/first released version. So all you AMers, check it out!
Posted by Laura "Sko" at 11/18/2010 08:42:00 AM No comments:

It's been an interesting year. Only a month and a half left of 2010. On one hand, it seems that I didn't use this year to its full potential, and although there is some amount of correctness to the thought, I spent a lot of this year learning about myself and about the world, and how I think the two should be related.

Tonight I had some time to myself, with inspiration from Queen, Temple Grandin, and a little Vouvray --- 2008, a good year! :) It's been a quiet, reflective kind of evening, which is highly welcomed after a string of working and crashing and noise. I don't really have anything more to say about it. Just thought I'd share. I'm happy. :-)

What better day than today, the 41st birthday of Sesame Street, to announce that I'll be returning to SpeakeasyFX on January 3, 2011, for a second season of Abby's Flying Fairy School. WOOT!!!

Some of last season's episodes can be found on Leslie's page! Yay! 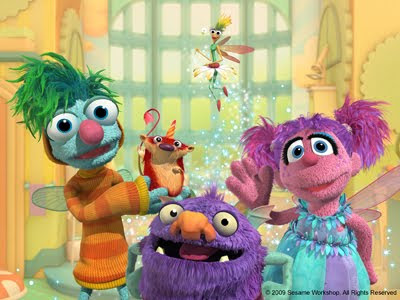 There are no words for this awesomeness.. so I'll just repost with credit to Jon Stewart and Schmoyoho.