One Per Person Kickstarter Launched! 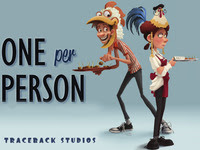 It is with great pride that finally I can share with you a little more about our CG animated short film project, One Per Person. As you already know, I'm an animation supervisor, which means I help lead a team of animators to produce the best quality believable acting and movement to sell the story written by our co-directors. We're a third of the way through the animation phase, and have had over 50 people (at least 20 of them animators) volunteer their time to this project, and we are working hard to complete it. Once we complete the animation phase, it will be time to light and render our film, which will cost us thousands of dollars due to the need for a render farm. That's why we've turned to Kickstarter for help.

Every dollar counts and is much appreciated. Thank you for your support, and without further ado, here it is!


*Update: 9/19/2012 at 12:30am central time:
As you know, earlier today we launched the kickstarter for our short film project "One Per Person" set to complete in 2013. Already we are 2/3 funded. I am amazed by the generous outpouring of support of our friends, family, and even perfect strangers. Simply.. Amazing!!! Thank you SO MUCH!!!

*Update: 9/19/2012 at 10:15am central time:
So I woke up this morning to find we had already surpassed our $6K goal in less than 24 hours. I am simply amazed. Thanks to everyone for your tremendous support!!! Having additional funds is wonderful because there is a lot of other cost we've endured in terms of file hosting, meetings, etc. It's also very likely that the render farm will cost us closer to $10K, so the money will all go to a good cause. Thank you so very much!

*Update: 9/20/2012 at 2:30pm central time:
Amazing. Today we're at $7.5K and still climbing. We are overjoyed at the outpouring of support and it is such peace of mind knowing we'll be able to afford this render farm as we approach our dream goal of $10K. THANK YOU!

*Update: 9/21/2012 at 12:50pm central time:
Got online this morning to see we are over $9K now. Unbelievable to think this $10K render farm may be fully paid for. Incredible, we never expected the level of support we're getting. Thank you all so very very much. It means a lot to us!!!

*Update 9/24/2012 at 1:03pm central time:
Incredibly we are over $11K now, in less than a week. We are humbled by the huge support and working hard to get things done now so we can finish our project and start getting it to festivals! Thanks again everyone for your incredible support!!!

*Update 10/11/2012 at 6:05pm central time:
One week to go and less than $400 left to meet our stretch goal. AMAZING! I am so thrilled to be part of this amazing project as animation supervisor. I can't wait for you all to see it!!! Thanks to all our supporters out there who are helping us finance our render farm and festival fees, and thanks to all our new recruits that have come on board in the last few weeks! It has been WILDLY AWESOME over at OPP!!!

*Update 10/18/2012 at 8:25am central time:
Incredible. 7 hours left to go in our kickstarter, and we made it to $16K. I want to say thank you once again to all who have supported us financially, all who have brought us their talents, and all who have wished us well. We couldn't have done it without you!

It wasn't until last week that I realized this year has flown by and I haven't posted a single thing on my blog. Not that that's entirely bad; it means that I'm not super narcissistic or have a load of empty time on my hands. I do love to write though, and don't invite myself to do it much other than to be conversational on Facebook or in IMs, which is not really writing. I am kicking around a couple of stories in my head, either for just writing projects, or possible animation projects, but nothing serious at this time. I have a lot of other things going on. 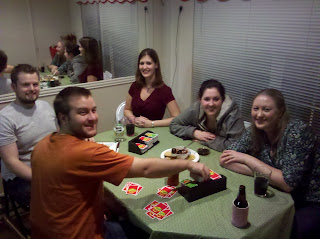 Started the year with a pretty awesome birthday, followed by a trip to San Francisco, followed by several months of living in Dallas and working with the rockin crew at Janimation, then a trip to Seattle for PAX and more family fun; pretty soon it'll be New Jersey for a weekend, ACL coming up, our fourth wedding anniversary, Halloween around the corner, something or another for Thanksgiving, and already it'll be Christmas and New Year's Eve all over again.

So, who installed the fast-forward button on life, and who can I call to install a pause button?

I don't understand why, but last year seemed unusually fast, and this year has gone by scary fast. I think I'm going to blink and I'll be 90 years old like my grandpa this year. 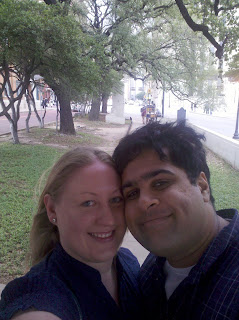 At any rate, life has been good. Crazy that we've been together for 10 years now. We've been talking a lot about making some big changes, but nothing too serious just yet. We are loving it in Austin and enjoying our good friends and lovely townhome. We talked about finally taking our honeymoon this year, but it appears to still be a dream since work interferes one way or another. Early next year I think we're going to take a nice big trip. Not sure if we'll call it a honeymoon or if it'll just be a long-overdue vacation, since we're epicly bad at taking those.

Hope all has been well for everyone near and far. 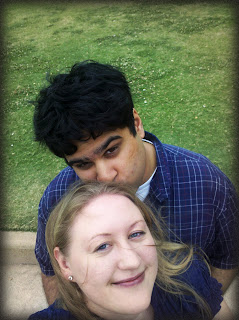